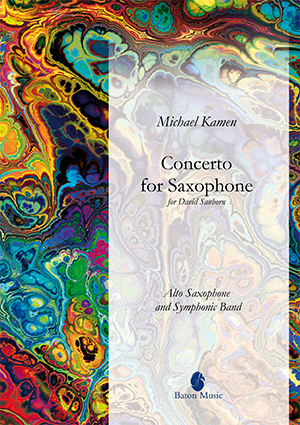 Michael Kamen (1948 – 2003) was a fine musician and composer, active in many fields of music. First and foremost, he was an oboist and along with his friend Martin Fulterman (aka Mark Snow, most well-known for his work on ‘The X Files’), was a member of the ‘New York Rock ‘n’ Roll Ensemble’, in which he also sang. Michael parlayed that into a burgeoning career in film, as well as an arranger for artists and bands, such as Pink Floyd, Annie Lennox, Kate Bush and Metallica. Though it was as a composer and conductor of music for film and television that he achieved his widest public recognition, some of his finest pieces of music reside in his classical repertoire, and are sadly little known to the public these days. In 1972, Michael Kamen and Dave Sanborn met in a recording studio in New York City. They became very good friends and colleagues as well. This friendship and partnership come together in 1989 when Michael composed a Saxophone Concerto for David Sanborn. This concerto, also known as ‘Concerto for Sanborn’, became in the end one of Kamen’s finest compositions. German musician Manuel Epli initiated in 2017 the realisation of a transcription of the complete Concerto for Saxophone and Symphonic Band. In 2019 it was Dutch arranger Roger Niese who finally was responsible for this fine transcription.