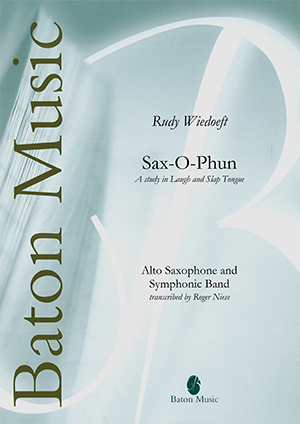 Rudy Wiedoeft (1893-1940) was born in Detroit Michigan to a large family of musicians, with whom he began his musical studies, playing in the family orchestra which toured as a professional ensemble. He began as a violinist, but had to switch to the clarinet after an injury to his bowing arm. As a young man, he discovered the saxophone and in 1918, he came to New York in the pit orchestra of the musical Canary Cottage where his playing was very favorably received by both the public and the critics. At this time, he began the long series of recordings with the Edison company which lead to his world-wide fame. One of these recordings, Sax-o-Phobia, written in 1918, became the largest selling solo in the history of the saxophone. Besides this signature piece Sax-o-Phobia he wrote several other classic tunes for saxophone such as Sax-o-Doodle and his ‘study in Laugh and Slap Tongue’ Sax-o-Phun.